Reflections on the first two weeks of the SPAB Scholarship, 18-31 March 2019

Having aspired to the SPAB Scholarship since I was 19, it was surreal to finally embark on this 9 month conservation adventure! And it has been a whirlwind so far, exceeding all expectations and delivering exciting new surprises too.

We started at SPAB base - 37 Spital Square in London. Myself and the other Scholars - Holly, Christian and Dan - met the four 2019 SPAB Fellows: Sean Henderson (stonemason), Luke O’Hanlon (stonemason), Sam Matthams (carpenter/joiner), and Matt Wilson (bricklayer and actor). It’s unusual for there to be eight Scholars and Fellows, but it’s proved to be an excellent cohort; already I feel like we have become a close knit group.

These first two weeks have been based around the southeast. It already feels like we have experienced such a variety of building types, materials, and crafts; hard to believe we’ve completed 10 days, not 10 weeks! Slightly unusual and unexpected for me was to be living at home for this period, making the start of the Scholarship less hectic than expected. Though I’m grateful for this ‘soft start’, I’m itching to hit the road and engage with hosts - this is what I’ve always considered to be the true Scholarship experience!

The first day ‘on site’ was in Essex at 18th century timber-framed lace makers cottages. Dale Perrin (past-Fellow) was helpful, extremely knowledgeable and shared his careful and thoughtful work with us in a quietly passionate way. Coming from practically no recent experience of timber framing, I was slightly overwhelmed by what there was to learn. Dale and his colleague Tim were patient, and the cottage owners welcoming and generous with their time too. 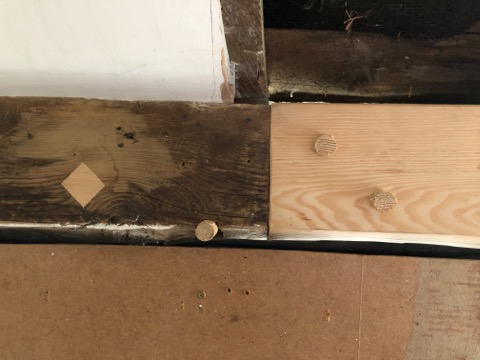 There was so much to absorb on site with Dale and Tim. One thing captured me for its beautiful simplicity - the use of circular pegs vs. square plugs over mechanical fixings (photo above). Apparently a known code of practice amongst carpenters, this allows another craftsperson to know if there is a screw fixing in place (under the square plug) or a timber peg. Perhaps a simple thing to note, but I was taken by the resulting aesthetic revealing this simple code. 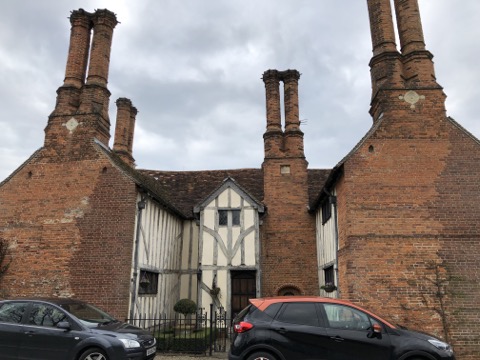 From this humble building, we jumped to Hampton Court Palace and Westminster Abbey for the rest of our first week. It’s hard to describe the sense of privilege and excitement one gets from being able to scramble around the roofs of these magnificent places! Once again, our hosts were gracious and generous. Coming from all different backgrounds, it was fascinating to learn from the other Scholars and Fellows and hear the questions they would ask. Our different interests and outlooks brilliantly coloured these experiences. 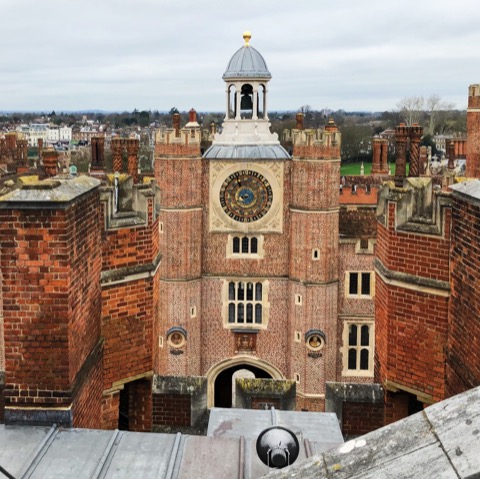 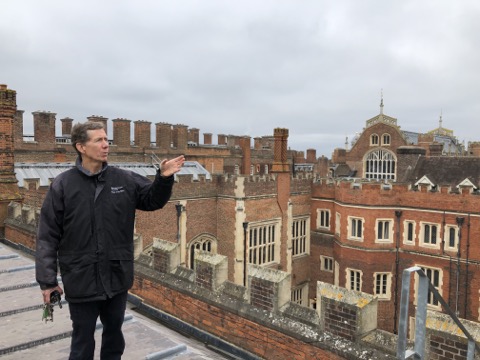 We were given a tour of Hampton Court roofs by William, surveyor of the fabric - shown above.

At Hampton Court, we were fortunate to be given the opportunity to try our hand at brick cutting and rubbing with the talented Emma Simpson, http://www.simpsonbcltd.co.uk. Emma discussed various brickwork conservation repair techniques, and we chewed over some philosophical and technical issues one can face with historic building repair. Cutting and rubbing the bricks was physically demanding and skilled work; we tried simple cuts and shapes, and it’s easy to see the expertise required for anything more complex! 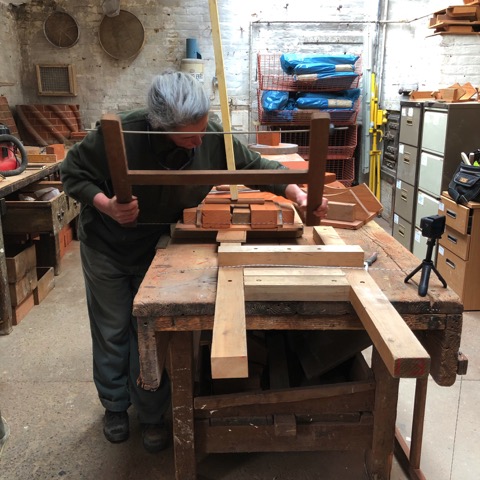 It was curious to discover that a brick saw is in fact made from twisted, reasonably thick wire. I fully expected a more traditional coping-type saw! The twisted wire cut the rubbing bricks with ease.

A personal highlight at Westminster Abbey was seeing the new Weston Tower and completed Queen’s Diamond Jubilee Galleries at Triforium level. In 2017, I visited the works as a CPD with Caroe Architecture. During that visit, Daedalus Conservation explained the careful workmanship and fine tolerances required. It was fascinating to see the final effect of this ambitious and dramatic design. I was tempted to think the result might be fussy, but the effect was quite stunning and wholly in keeping with its surroundings; to use SPAB’s words, it had the effect of complementing the existing without parody. 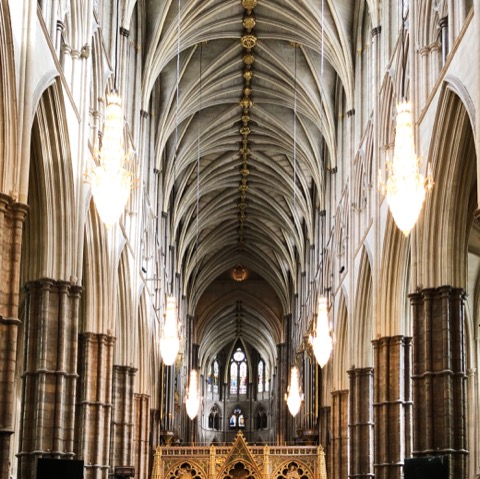 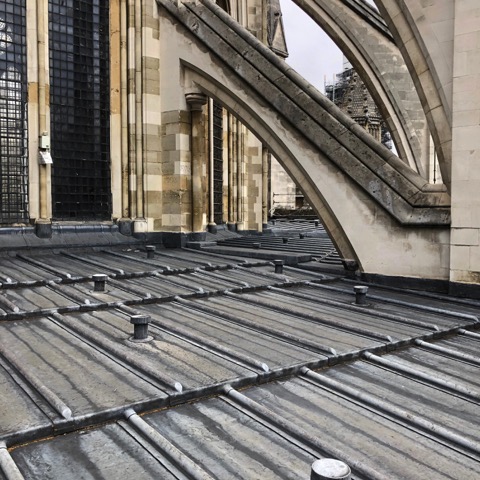 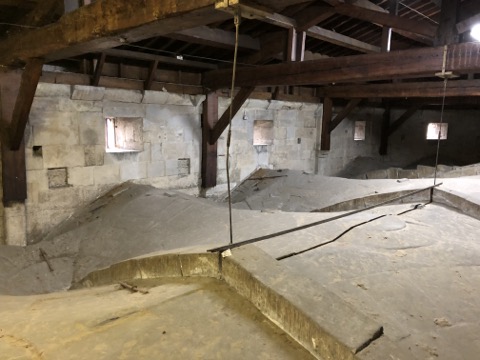 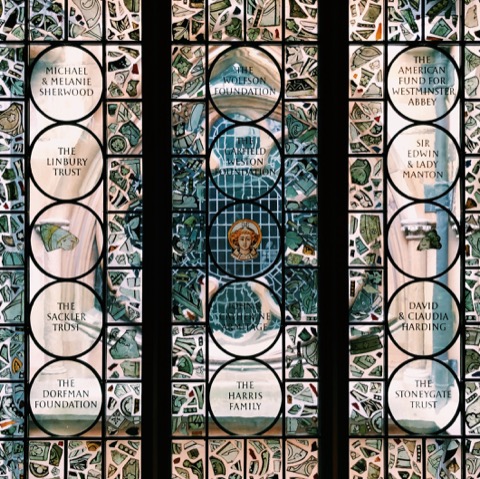 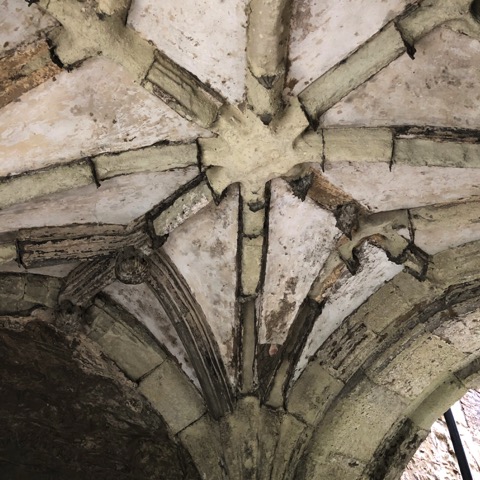 Reigate stone vault at Westminster school - reigate weathers poorly. The lead between the weathered stones can be seen. 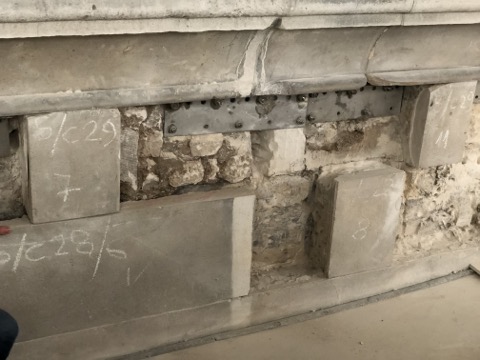 On-going project at St Margarets Parish Church, next to Westminster Abbey. We climbed the tower scaffold with Ptolemy Dean to see the re-cladding and work to remove existing iron cramps.

Week 2 brought even more variety and excitement! Two days were spent at Spital Square - a slower pace but interesting contrast to our adventures on site. We also spent a day with Philip Gaches at Cobham Hall Dairy in Kent. Owned by the Landmark Trust, the 18th century dairy by James Wyatt was on the at risk register. We were fortunate to see the start of Philip’s plasterwork internally; as something I have never experienced, this was hugely informative. I’m not quite sure how I thought vaulted plasterwork ceilings were produced, but the complex system of running rules, jack templates and moulds was an eye opener! We also discussed some of the decisions being made for the building generally, such as re-cladding the brick in slate (samples of the final painted slates were viewed by conservation officers with architect Purcell later that day). It was my feeling that the Landmark Trust had chosen to restore a lot of the building where perhaps conservative repair might have been employed… but that was quite open to interpretation, and a tricky question! 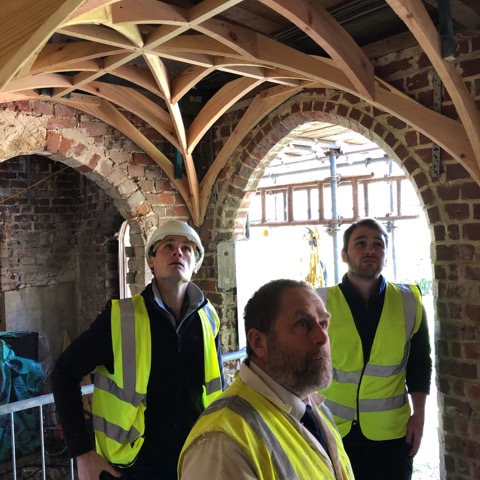 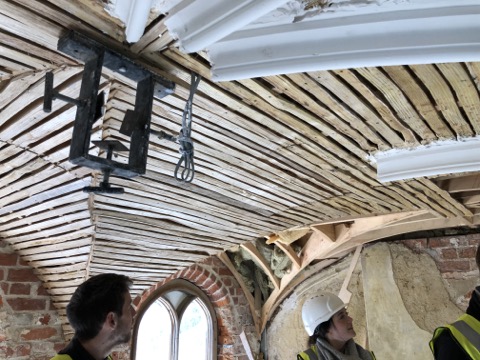 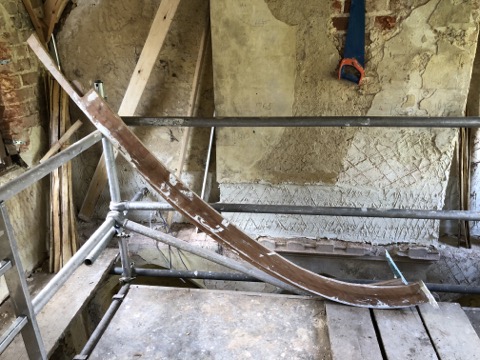 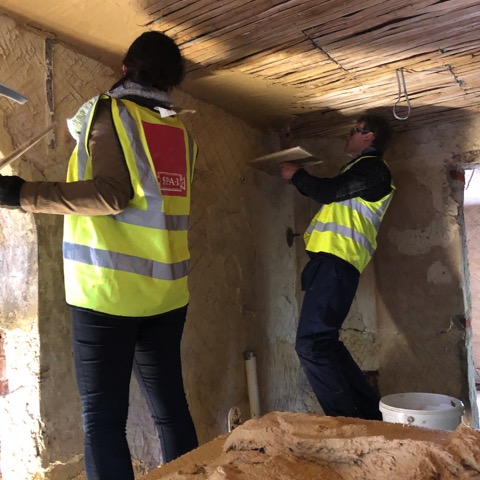 Scholar and Fellow trying their hand at a lathe and plaster ceiling.

Following this, we were given tours of Mansion House in the City of London, Keymer Tiles in Surrey, and Hall Conservation in London. Once again the highlights for me were hand-making - both a clay tile with Keymer, and blacksmithing with Hall Conservation. Blacksmithing was hugely physical, ‘heavy’ work, whilst simultaneously being incredibly skilled and precise; I found it near to impossible! But it was wonderful to see and try the process, and we learnt so much from Brian (director) and Joe (past-Fellow). I left with huge respect for their skilled craftsmanship. And so concluded our first two weeks - exhausted, overloaded with information, physically aching… but very happy! 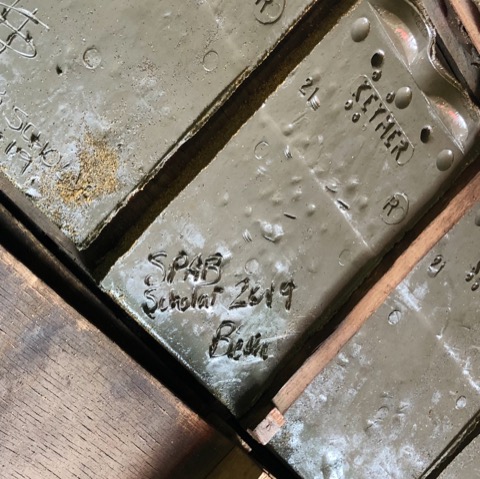 My attempt at a handmade clay tile at Keymer Tiles. 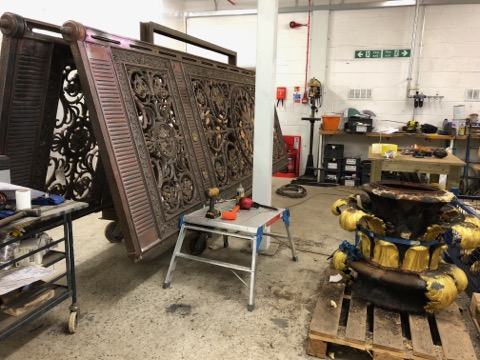 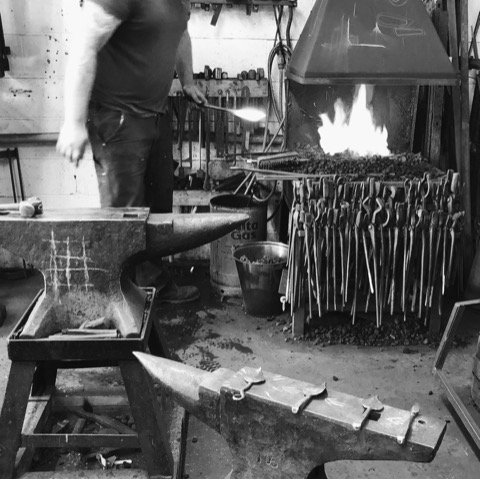 Sadly we will split from the Fellows for the next part of our programme. They have been invaluable during the last two weeks - wonderful, interesting people and good fun too. But critically has been the ability to call on them for advice and to learn from their amazing knowledge and skill sets; this has been hugely rewarding. I know all of us Scholars will miss the opportunity to bounce ideas and discussion off the Fellows as we have become used to doing, and we’ll look forward to re-joining them soon!

Onwards into the third week now - and finally ‘on the road’!