Volunteer Casework for the SPAB

One of the ways in which Scholars can give back to the Society is through Casework. The SPAB describe the role of Casework:

Since the foundation of the SPAB in 1877, casework, campaigning and advice has been at the centre of our work. Today in England and Wales, the Society has a statutory role in the secular planning system… the SPAB is one of six National Amenity Societies that must be notified by local planning authorities of all applications that involve the total or partial demolition of a listed building, giving us an opportunity to comment on the proposed scheme… The SPAB concentrates on applications concerning buildings with fabric dating from 1720 or earlier.

It’s worthwhile and interesting work, and I’ve always been keen to get involved. As an architect, it appears to be ‘the other side’ of the table during design discussions; I have met with SPAB casework officers during my projects at Caroe, during the consultation process in the lead up to consent submissions. I felt it would be interesting to understand this process from ‘the other side’, and though the Scholarship we have been given that opportunity.

Our chance to participate as volunteer caseworkers came on 20 June 2019. We met Andrew Townsend in Charlbury, Chipping Norton, to look at Talbot Farm. We were met at the building by the current owner, who showed us around and explained her thoughts and proposals in situ.

Talbot Farmhouse is a Grade II listed former inn, originally thought to be a large medieval hall-house. It is considered one of Charlbury’s oldest and most important historic buildings, believed to be from the 16th century possibly with earlier medieval origins. The structure is coursed rubble stone with a remaining two-bay cruck frame on a timber wall plate at first floor. There is 17th-19th century remodelling but overall the building has minimal later additions or alterations. 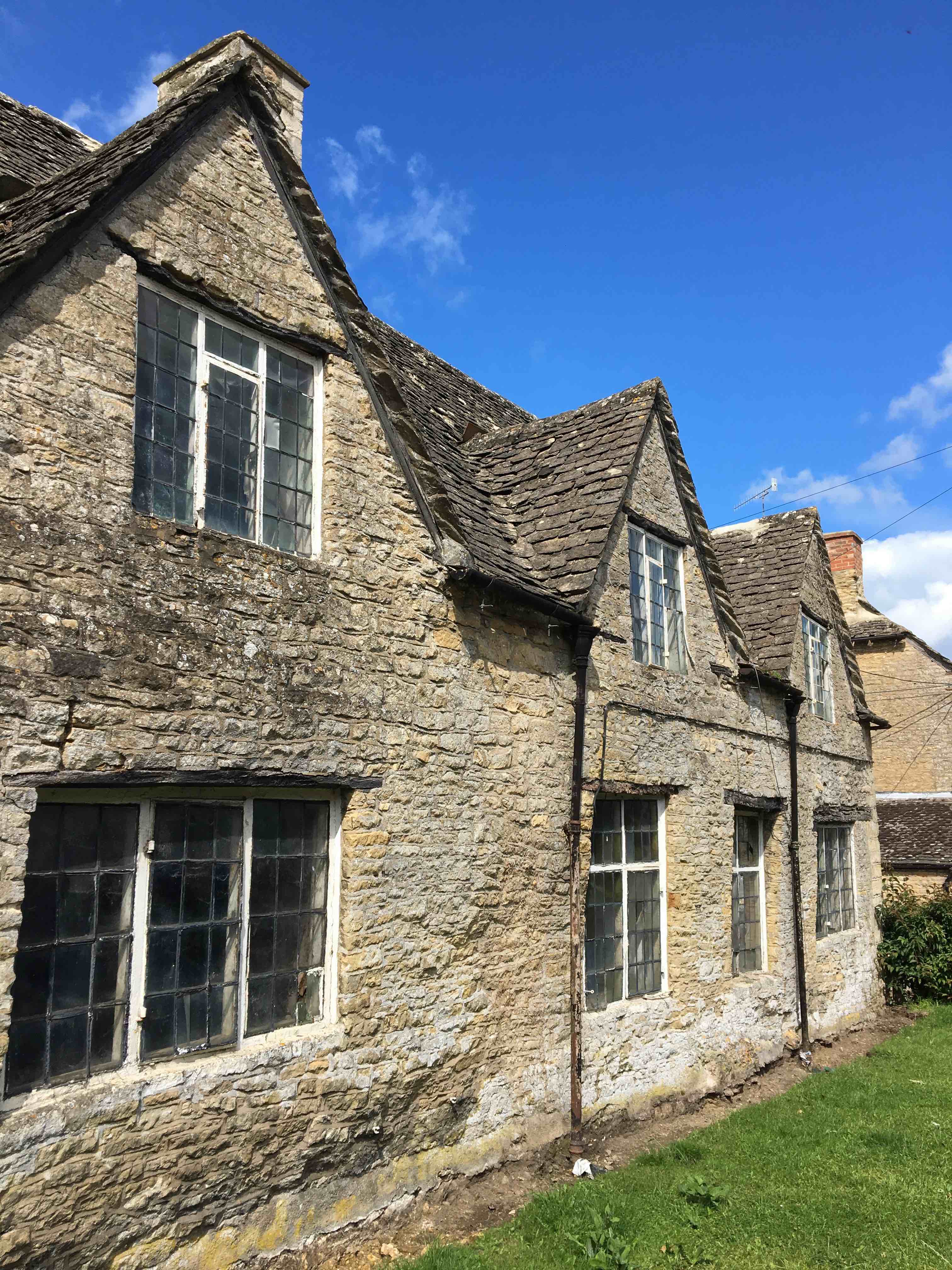 We saw the Talbot in its current semi-derelict condition; it has been unoccupied for several years. The proposals which the current client talked us through intend to bring new life and purpose. This includes changes and repairs to the existing fabric, and a new two storey extension for a kitchen with en-suite above. 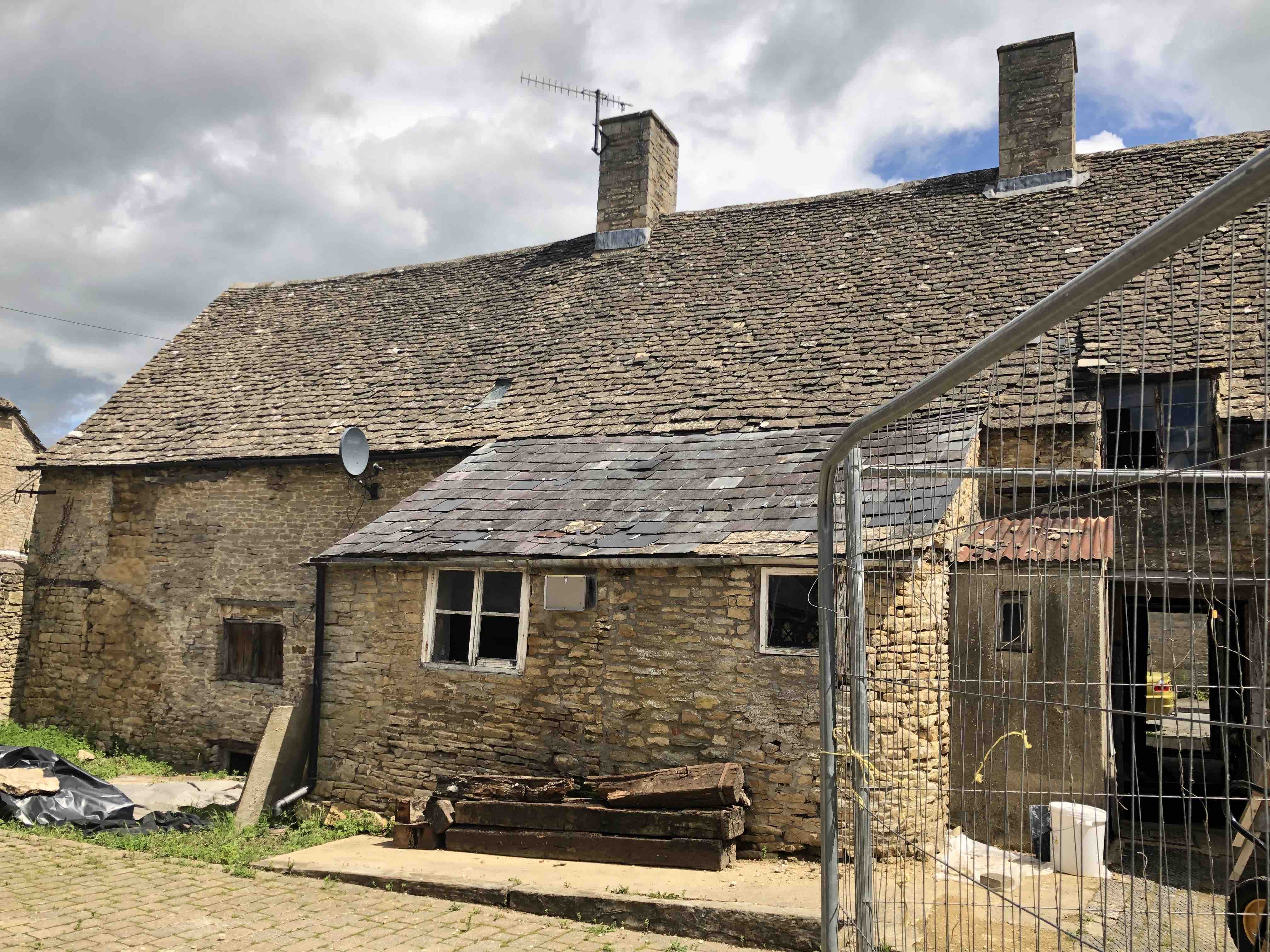 Rear elevation of Talbot Farmhouse, where the new kitchen extension is proposed. 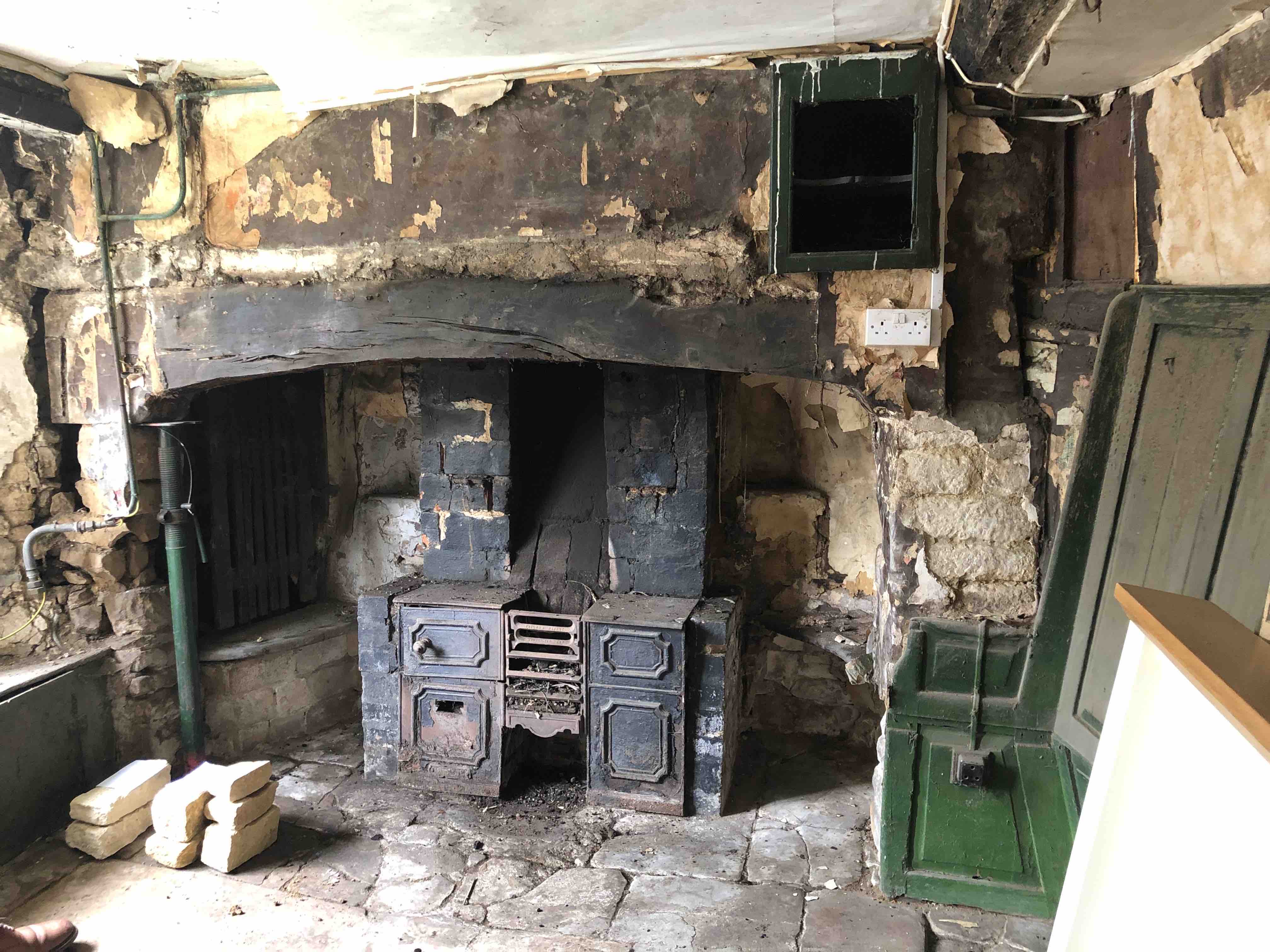 The living room with large range. The settle back is to the right.

The listed building consent application described a careful approach to the historic fabric. This was reinforced by discussion with the client in person, who also proposed to make the majority of the repairs with appropriate materials. We all had some reservations over certain aspects, and further suggestions to make. The client was open to discuss alternatives and our thoughts, and this made for interesting conversation on site.

The client was proposing to keep some layers of wallpaper as they had come off the wall, for records.

A full and proper account of this visit - as well as SPAB’s comments on the application - have been detailed in the latest edition of the SPAB Mag (Autumn 2019 issue). As a very brief summary, us Scholars generally found the conservation approach was appropriate and welcome. There were a few areas where we felt further specialist involvement might be beneficial (for example from a structural engineer and conservation architect or surveyor), and where further details would be good, and perhaps a fresh look at the design for the extension. It was useful to hear Andrew Townsend’s take on these things too, and read his final report to SPAB (which he based on our own group report written the evening of the visit.)

With the expectation that Scholars contribute to the SPAB beyond their Scholarship, this is one way in which I would be keen to stay involved! It was rewarding to be involved with a project at the early stages on behalf of the SPAB, and also fascinating to meet the client and explore the building. Hopefully more to come in the future! 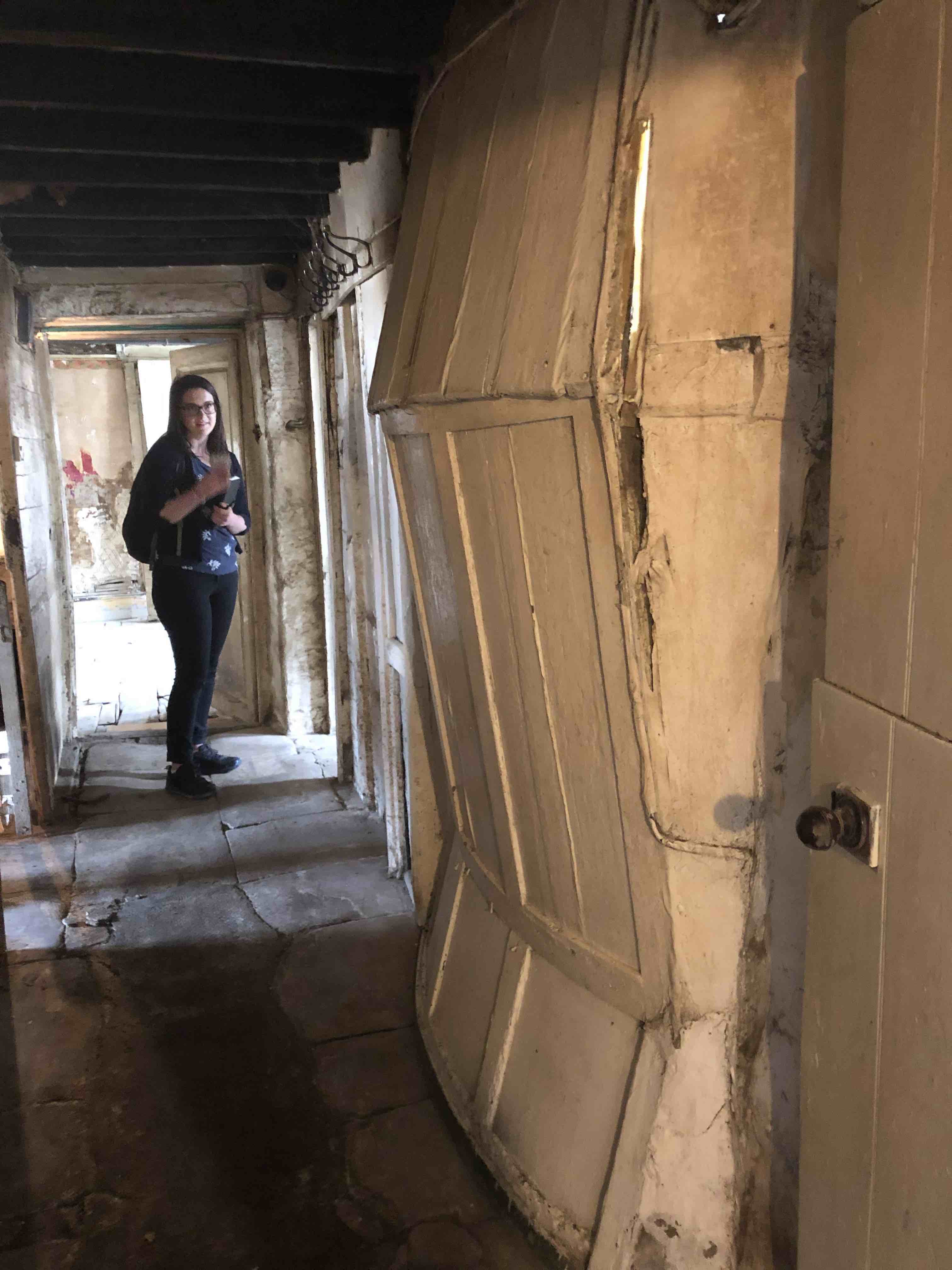 Holly, my fellow Scholar, taking a photo of the hallway with shaped back of the settle on the right. Note the concrete fill of the worn flagstones.