Final thoughts on an amazing year - the SPAB Scholarship 2019

All good things must come to an end… and it was with great sadness that we came to the end of this amazing, once-in-a-lifetime experience. I finished the Scholarship at Hemingford Grey Manor, staying with the wonderful, kind and generous Diana Boston; a fitting end to a fantastic year.

Our ‘last hurrah’ took place a week later though, when we gave our final presentation to the SPAB at Toynbee Hall, London, on 10 December 2019. As well as reflecting on our Plunket experience (see previous blog entry!) we were asked to give three points that “we will be taking away from our Scholarship as we move into the next stage of our career.”

Needless to say, trying to focus on only a few points to be taken away from the Scholarship was tough… such has been the amazing plethora of visits and experiences we have had this year! To try and pin down a few examples from the monumental number of learning opportunities we’ve had, I decided looked back to the ‘Briefing Day Feedback Form’ which we were asked to fill in on our first day of the Scholarship, on 18th March 2019 in Spital Square. We were asked, personally and professionally, what we hoped to gain from the course. I can safely say I have achieved all the goals and dreams I identified back then, and it’s exceeded expectations in every respect. I have picked up on a few key points below.

First, I have extensively widened my knowledge of UK vernacular architecture. In terms of conservation knowledge it’s wildly useful to have an idea where materials come from, and where certain crafts might be more prevalent, as well as where craftspeople, companies and manufacturers are based. Through this, I’ve gained a lot of knowledge of different building typologies, and with that widely expanded my architectural vocabulary. It’s quite obvious that this will have a positive impact on the next stage of my career. 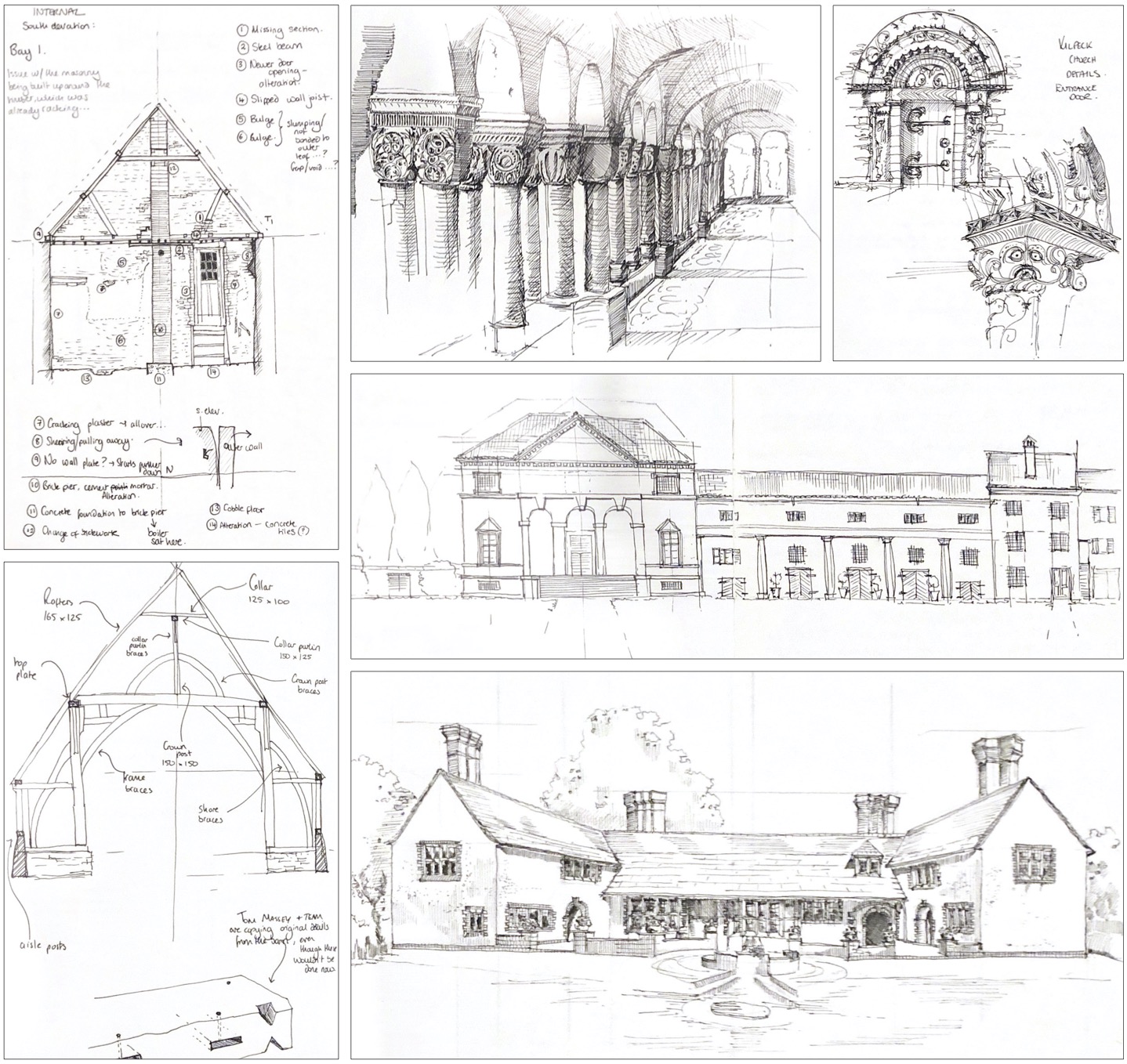 Sketchbook extracts to show just a few of the many different building types we have visited.

In addition, it’s shown me what’s out there and what needs to be conserved and what I could be working on; this period of travel has given me a kind of hunger to ‘get out there’ and work as widely as possible. I also hope to continue to learn and travel because I know in terms of places we visited we only really scratched the surface of the UK. Also, I’m pleased to say I now know that Norwich isn’t in Northumbria, so that’s a bonus! 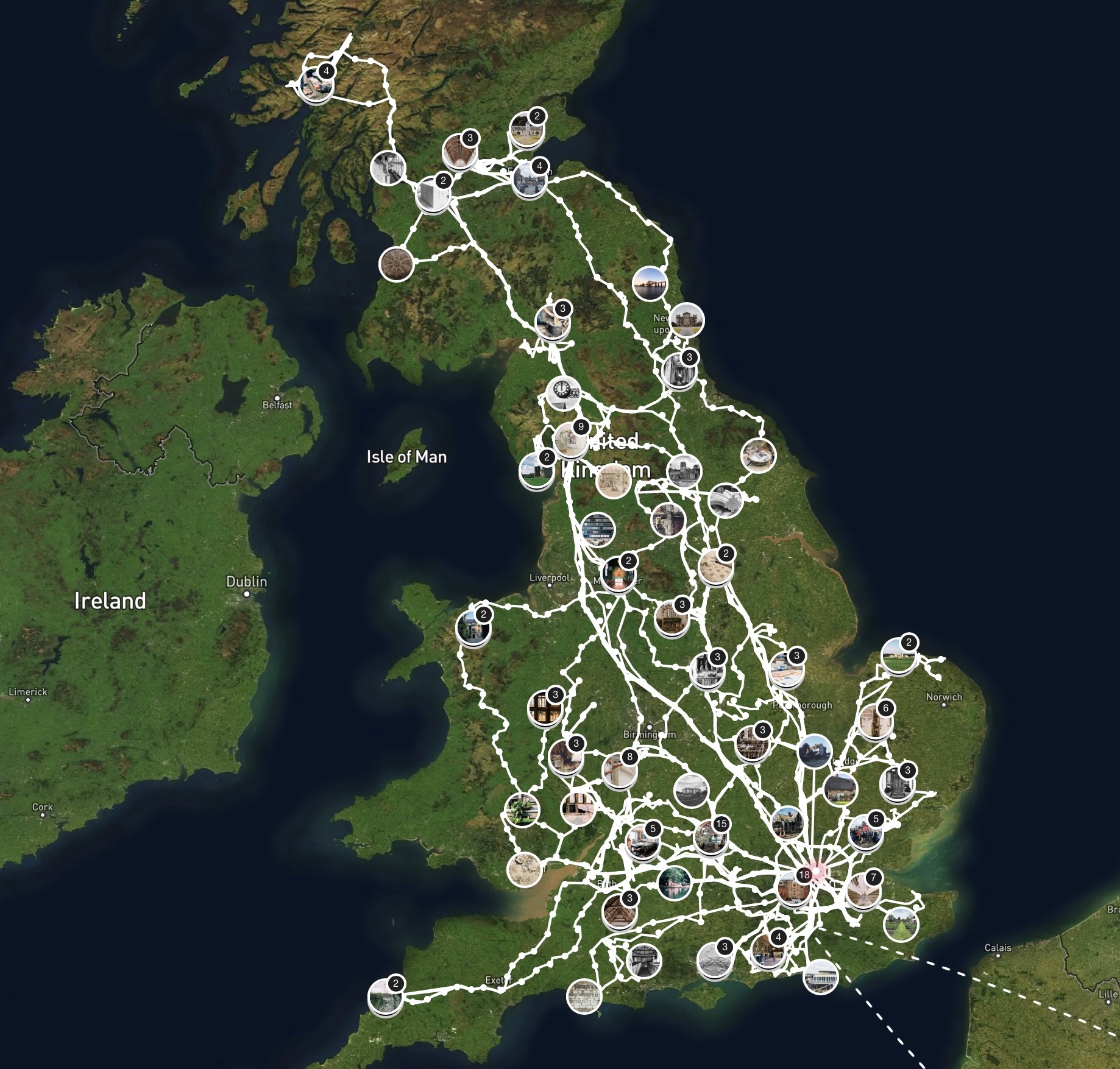 We used the app PolarSteps to track our progress around the UK - and Italy. We covered so much, but there are still so many gaps left to explore!

I also said on the Briefing Day Feedback Form, that I had a lot to learn in terms of developing my conservation ethos, and certainly this has been discussed a lot in various ways over the past 9 months. Before the Scholarship, I had what I thought to be an understanding of SPAB’s philosophy as laid out in the Approach and Manifesto. Before - as it still does now - this approach resonates with my emerging conservation outlook, in particular the principles of regular maintenance, conservative repair, and the general approach to new design in historic contexts.

However, the Scholarship has showed me that there is more variation in this approach than I had previously seen or expected to see. We saw SPAB philosophy used as reasoning for all sorts of work, and sometimes for a reason not to do certain work at all. I found the interpretation of the philosophy quite wide, and the rigorousness of its application similarly varied - whatever the equivalent of ‘selective hearing’ might be for the application of conservation principles! 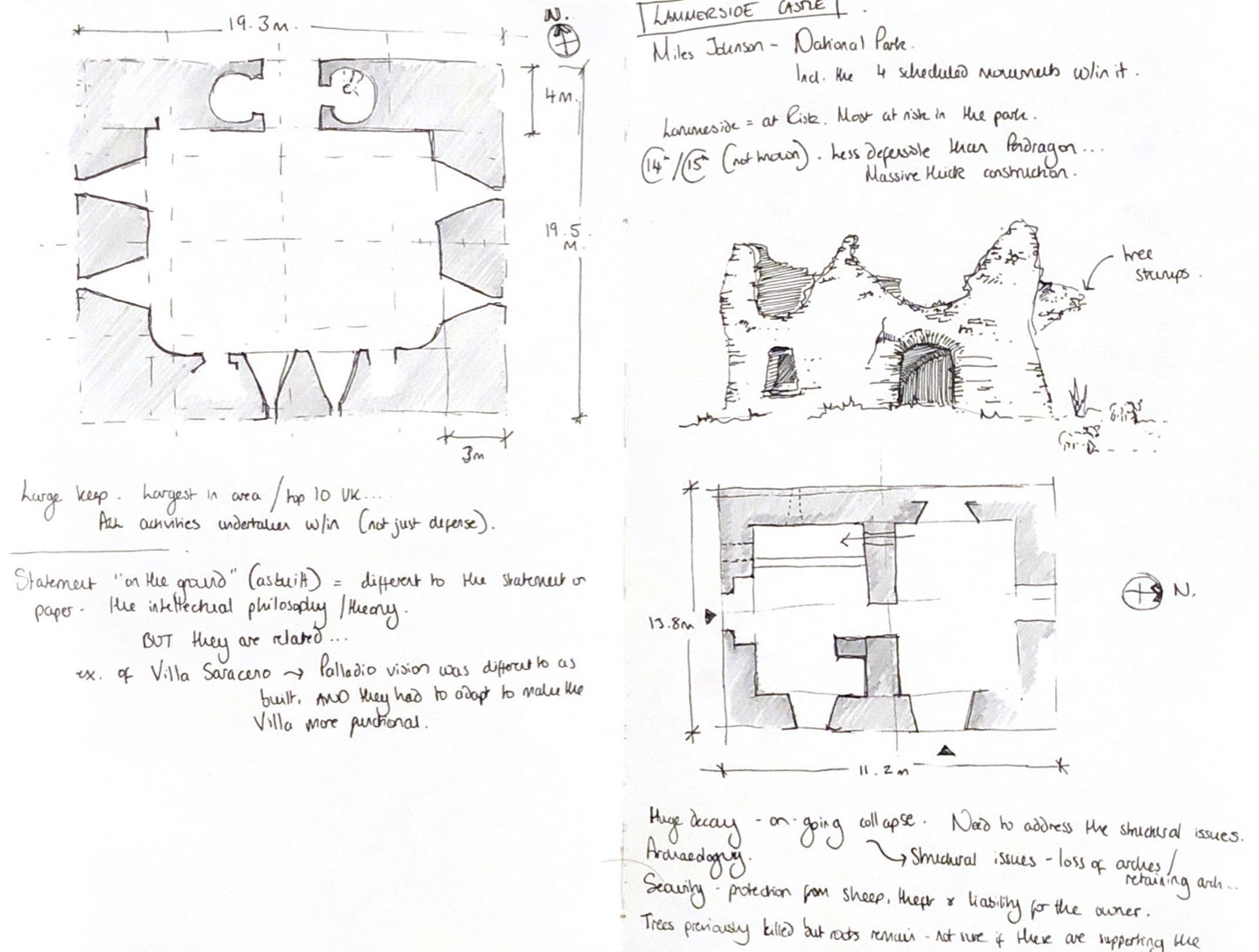 The conservation of ruins, which was all new to me, led to interesting debate we had at various ruins about managed decay, restoration, or not… 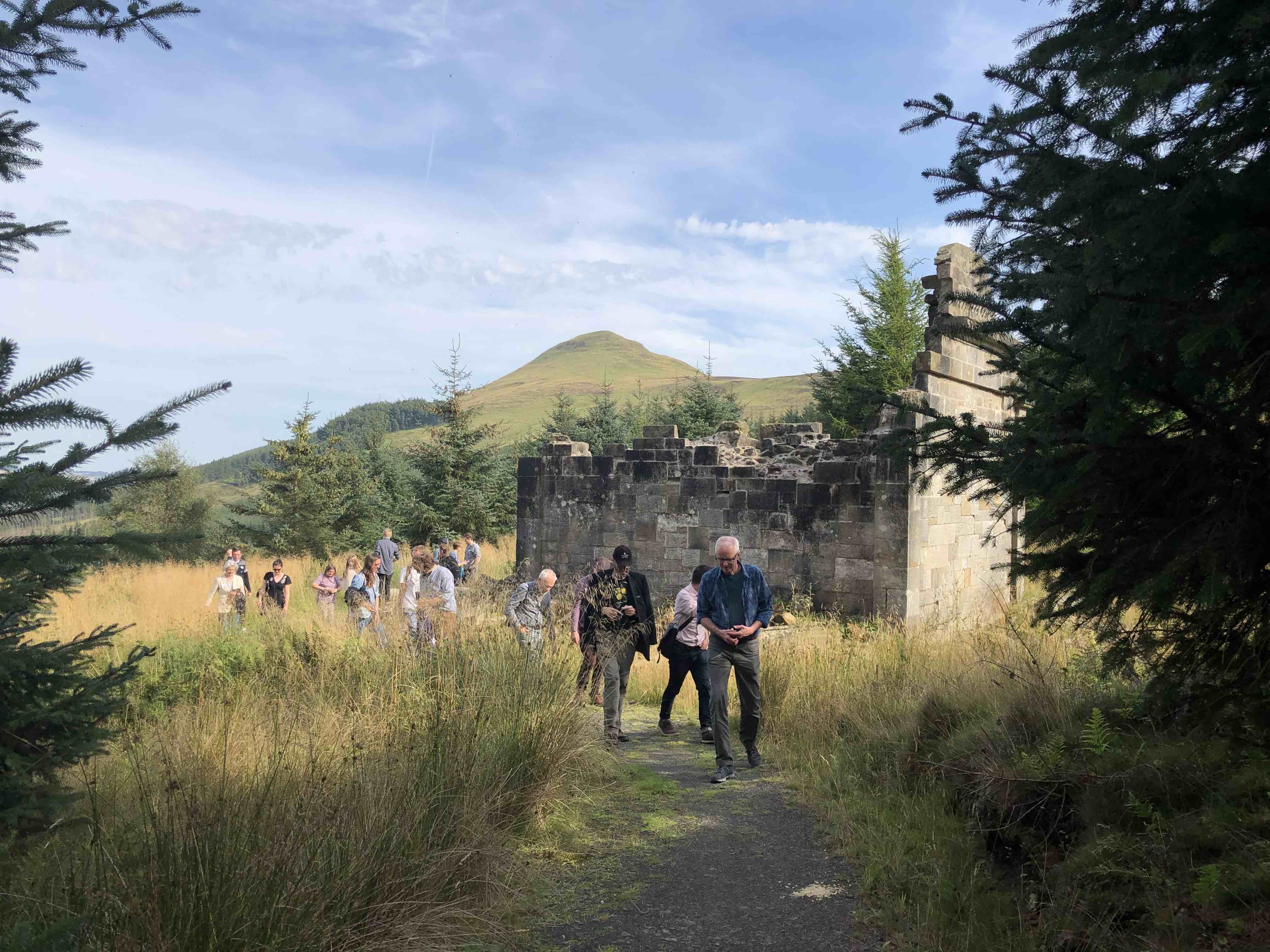 The Temple of Decision on the Falkland estate, where all the delegates were asked how we thought this should be conserved or restored; there were as many answers as there were delegates.

For the third point that I’ll be taking away from the Scholarship, I discussed the ‘Passionate Defence of the Craftsperson’, which I’ve previously picked up on in an earlier blog entry (about the Falkland Craft Symposium.) My point was much the same - that we’ve seen a wide variety of craft skill and talented craftspeople across the UK, but the reality is that skilled craftspeople are few and far between, and it’s a real concern that some craft skills are dying out. I discussed some ways in my career going forwards that I might maintain a building’s craft spirit, involve craftspeople in projects as early as possible, and incentivise young people to train in these areas. It will be interesting to continue the discussion about how to safeguard craft skills… and to continue the training and education that the Scholarship has so brilliantly started for me! 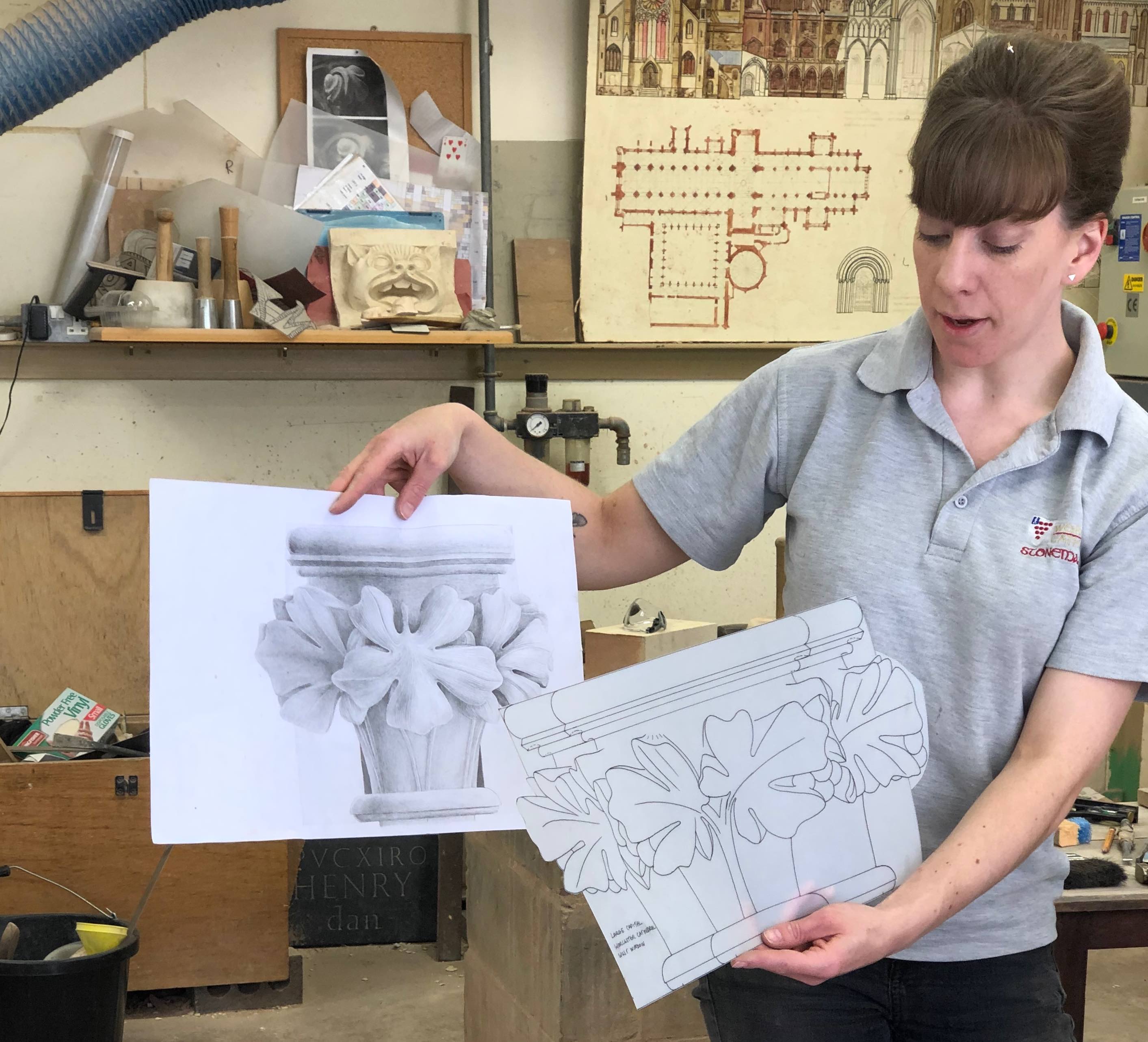 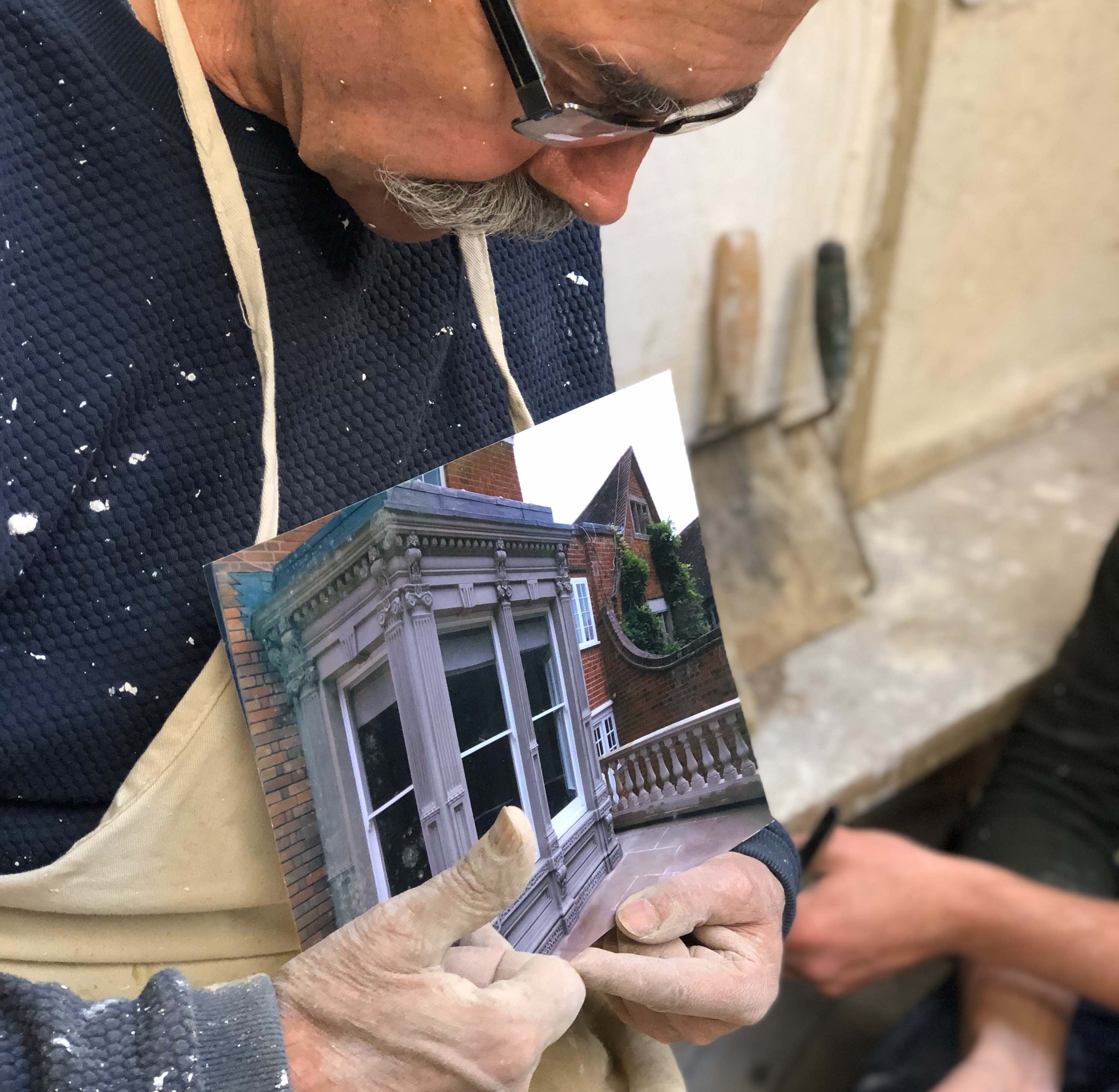 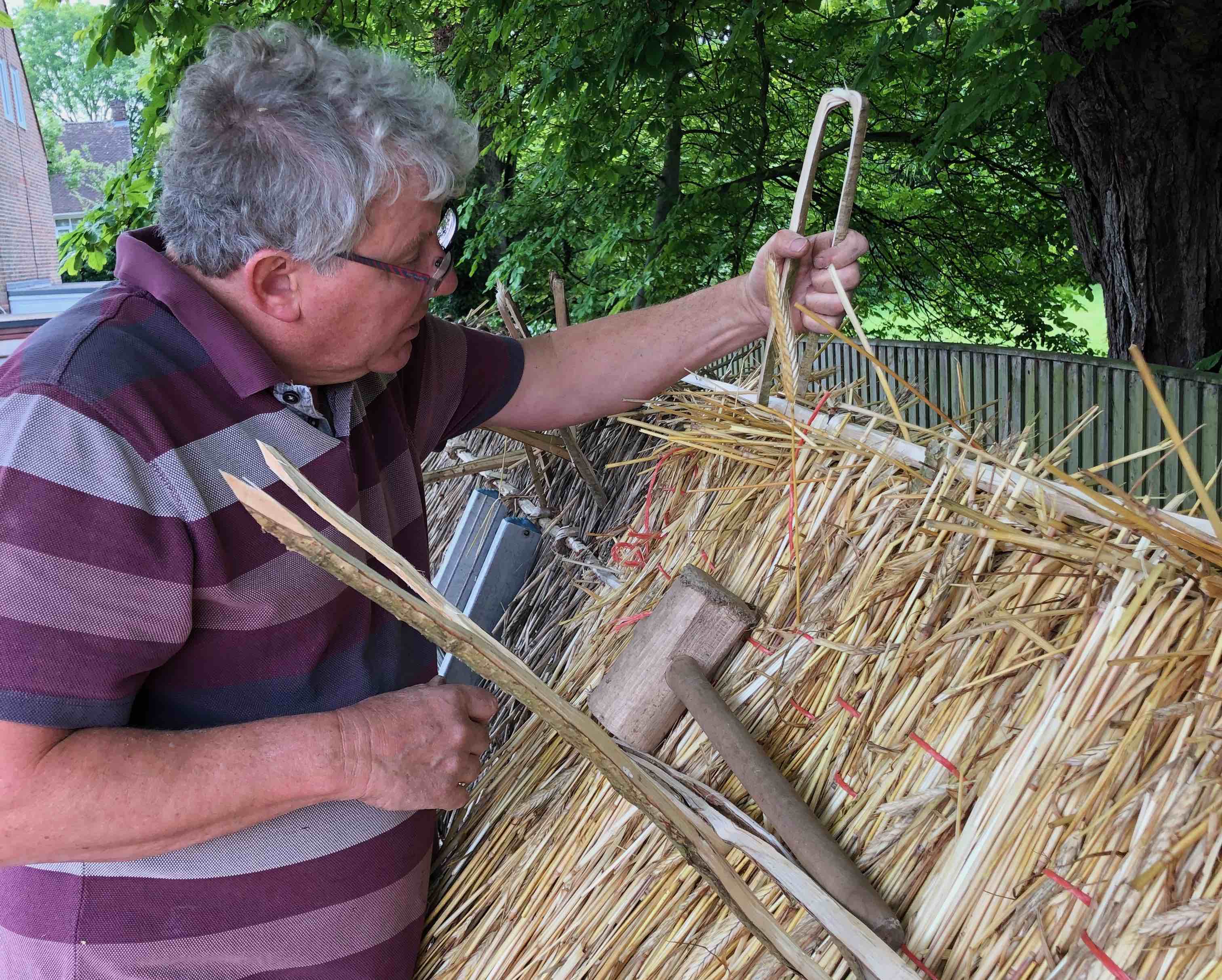 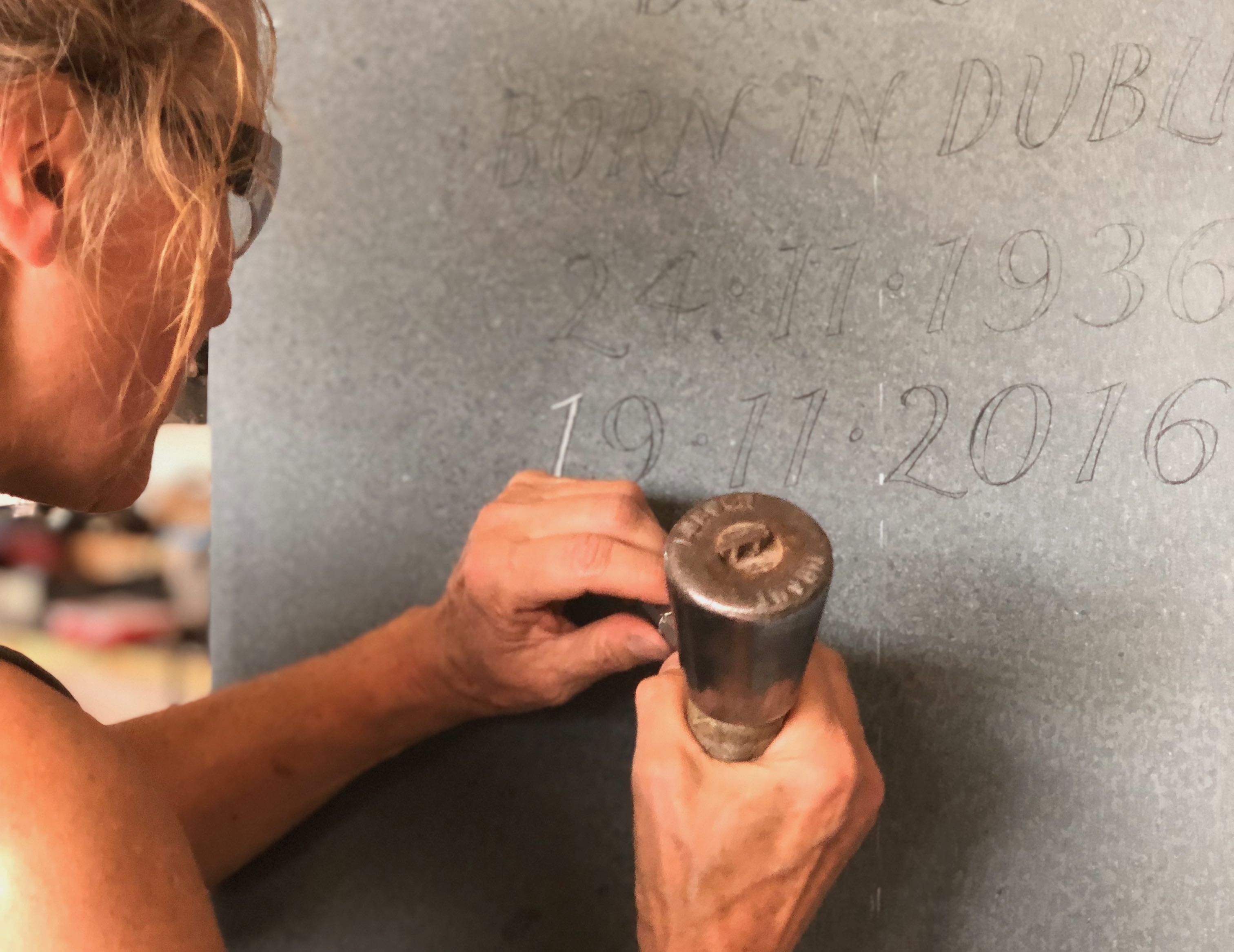 Looking back at just four of the vast number of amazing craftspeople we met along the way - from the top: Emily Draper, stonemason at Worcester cathedral; Mike O'Reilly, a plasterer (but evidently so, so much more!); Kit Davis, a thatcher who taught us in Blewbury, Didcot; and Pip the letter cutter, introduced to us through John Bucknall.