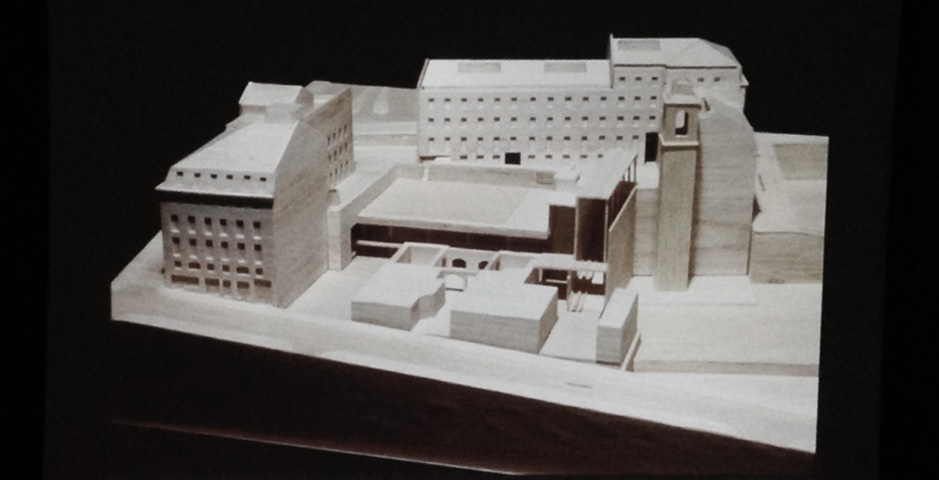 L'Università Politecnica delle Marche hosted Gonçalo Byrne for an afternoon lecture about his restoration work in ancient buildings, followed by a discussion. The event was called 'Architecture and Contemporaneity - from the time of history to the time of the present', and Byrne - a Portuguese architect - focused on his design process which is rooted in an understanding of the history of place and building. Through several example projects, it was interesting to learn how Byrne's designs are intrinsically developed from found conditions on site or in the city, despite their often contemporary and perhaps out of place appearance. These projects were all in Portugal, and included his work with Alvaro Siza in post-fire Lisbon.

The project I find particularly beautiful, and useful as a precedent for my own project, is the Edificio Praça Eça de Queirós in Leiria, Portugal. Taking up an entire block of the city but conforming to the shape and scale of the existing, this building fills one of the voids in Leiria's ruined historic centre. Byrne calls it a 'building-square', because a large part of the structure is taken up with an open public platform accessed directly from the main streets, providing social space in a part of the city where these are scarce. A large amount of glass on the facades means this previous gap in the city is filled with reflected historic fabric, including that of the castle from which the cafe of this new structure has a perfect view.

I was fortunate to have a private tutorial with Byrne after his lecture. When speaking about the Edificio Praça Eça de Queirós, he said that it's not used the way he had intended it, as the majority of the population in Leiria are elderly and the cafe is not open as a bar, but only for a few hours in the afternoon. I asked if the residents rejected to such a potentially controversial, modern scheme; apparently they were mostly just curious about what was happening in this site, as it looked quite in keeping with the surroundings.

Gianluigi Mondaini, the course leader for the Architecture Construction Engineering degree at the University, asked Byrne at the end of his lecture a question which is particularly relevant to my thesis. Mondaini also observed that these projects could be quite radical in terms of their insertion of new fabric into historic contexts, and despite a complementary approach they often alter or change the perception of the old structures in quite dramatic ways. He asked: Could this ever be achieved in Italy? Byrne was not as sceptical as some others' I've asked the same question, although he did say in Portugal there is much more freedom to work with and adapt heritage fabric. But he said a positive answer would mean overcoming severe bureaucratic issues, and would take time. Furthermore, the process would involve collaboration and the complete understanding that not one person - client, architect, Soprintendenza, local community - has total control over what should be constructed; all parties must work together.